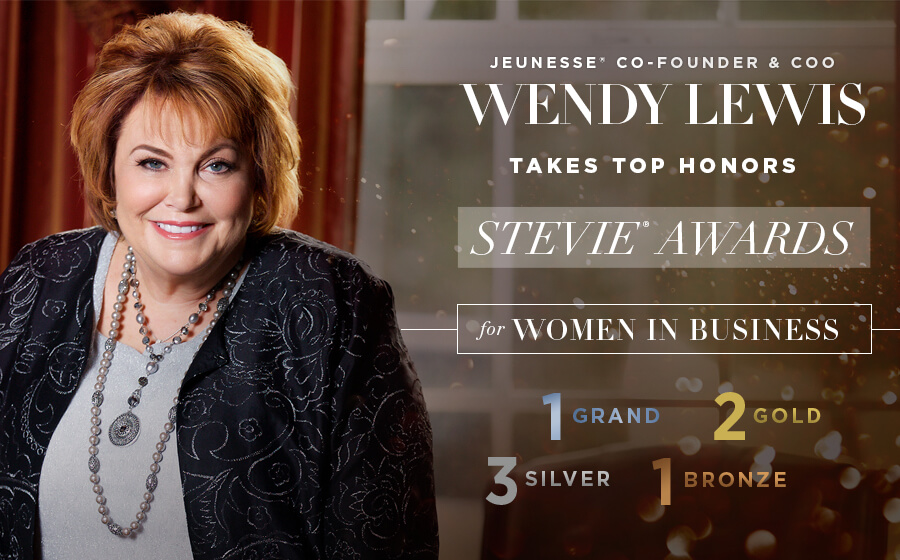 Congratulations, Wendy! Jeunesse® Co-founder and COO, Wendy Lewis has received an impressive six Stevie Awards in the 13th annual Stevie Awards for Women in Business including 2 Gold, 3 Silver and 1 Bronze award, making her the top individual award-winner from the more than 1,400 entries, and earning Jeunesse one of just five Grand Stevie Awards conferred for the best overall body of entries in this year’s competition.

Awards were recently announced at a gala event in New York where Lewis and Jeunesse garnered a total of seven Stevie Awards:

Recognizing Wendy’s accomplishments and character, the Stevie Awards for Women judges called Wendy, “an innovative, provocative leader driving results while making a difference” and said, “She shows others that you can change your life at every moment.”

Jeunesse Chief Visionary Officer Scott Lewis congratulated Wendy on her awards commenting, “A large degree of the success Jeunesse has enjoyed is due to Wendy’s leadership overseeing daily company operations and her ability to empower others. Whether it’s releasing children from poverty, providing employees with professional development or through marketing our youth enhancement products, she has been a positive force for change for so many and we are so proud of her accomplishments.”

Wendy acknowledged the accolades with the humility she’s known for, saying, “It is an honor to be recognized alongside so many talented women in this year’s Stevie Awards for Women in Business. I am fortunate to be in a position to empower others and it is their success, I believe, that is the most meaningful measure of accomplishment.”

Jeunesse is fortunate to have such a talented business leader and entrepreneur at the helm. Over the past several years, Wendy has received 20 professional awards including being twice named as one of the Most Influential Women in Direct Selling, being honored six times as Woman of the Year and receiving two Lifetime Achievement in Business awards.

The Stevie Awards for Women in Business are the world’s top honors for female entrepreneurs, executives, employees and the organizations they run. All individuals and organizations worldwide are eligible to submit nominations — public and private, for-profit and non-profit, large and small. The 2016 awards received entries from 31 nations and territories. A full list of winners can be viewed here.