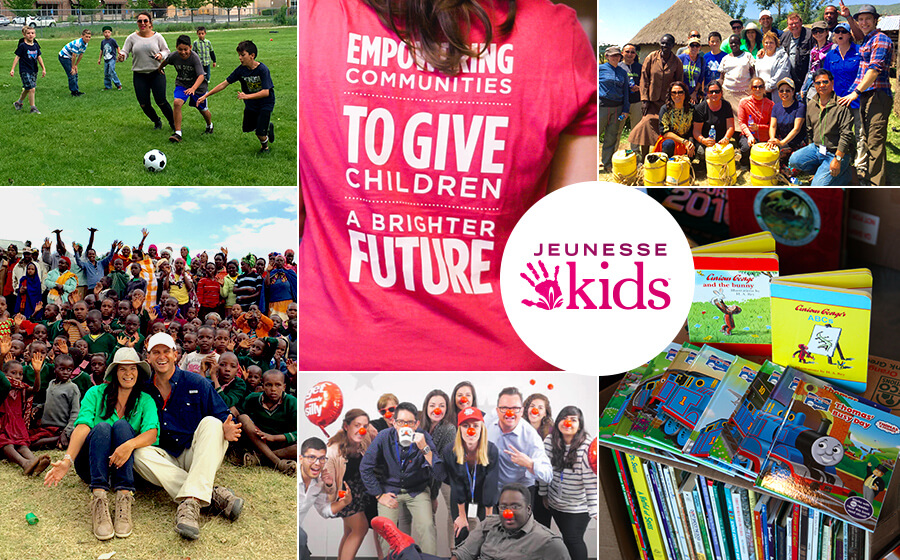 As a member of the Jeunesse family, it goes without saying that you have a servant’s heart — and this was no more apparent than in the incredible growth we saw in Jeunesse Kids throughout 2016.

"I was deeply humbled this year by the passion and selflessness of both our Distributors and employees. Each time I asked for volunteers, I had to turn people away because I had too many, and each time I set a fundraising goal at an event we superseded it,” said Alya Poplawsky of the Jeunesse Kids Foundation.

Your generosity and belief in Jeunesse Kids was on full display at EXPO Empower in Orlando, as our goal of $250,000 was more than doubled when $612,457.56 was raised.

But that’s just one example of putting our collective mission first. Here is a glimpse into the year and a little of what to expect in 2017...

IN NORTH AMERICA, we joined with the Boys & Girls Club in both Florida and Utah, with 60 Jeunesse corporate employees donating more than 120 hours to help with homework, physical activities and mentorship for countless children. (Read more here)

“There is nothing more rewarding and fulfilling than finishing a long and busy workweek by giving back,” employee Jacky Baca said. “It was an extremely humbling experience.”

Our contributions across the U.S. were only getting started, as we partnered with the Foundation for Foster Children in Central Florida to provide nearly 300 children with handmade birthday cards – all made by Jeunesse employees and their families in Utah and Florida. We also purchased gift cards to help high school foster children so they could participate in activities such as senior prom or buy a cap and gown. Our goal was $2,000, but exceeded that to the total of $3,062! (Read more here)

We also participated in Red Nose Day, setting up an employee photo booth with props, taking $1 donations to donate to the cause. And let’s just say the donations were much bigger than a simple dollar. (Read more here)

In June, we donated more than 1,400 books as part of the Heart of Florida United Way’s Day of Action, allowing kids to continue to read throughout the 2-3 months they lose over the summer. (Read more here)

July was a busy month for Jeunesse Kids, as we joined with City Year Los Angeles as part of our Jeunesse University in Hollywood – raising $20,535 to start an after-school program at the 99th Street Elementary School in Watts, known to be one of the lowest-income neighborhoods in Los Angeles.

Meanwhile, on the East Coast, we partnered with the Zebra Coalition in Central Florida to host a cookout. The Zebra Coalition was established to aid the growing number of LGBT+ youth who experience homelessness, bullying, extreme physical and sexual abuse, isolation from their families and a wide array of life challenges.

“Due to the tragedy at Pulse nightclub, the youth at the Zebra Coalition® were in desperate need of a sense of security, safety and hope,” commented Alya Poplawsky.

IN LATIN AMERICA, 119,880 reales were raised at our Grand Launch in Brazil to purchase medical equipment for the pediatric oncology ward at the IMIP Hospital. The new equipment helps detect cancer earlier and treat children more effectively.

We had another successful project in Brazil when we partnered with Teleton to bring awareness to not only Jeunesse Kids, but also to raise funds for the AACD Hospital, a hospital that treats children with disabilities such as childhood paralysis. The participation from our leaders and Distributors was incredible:

We also sponsored a symposium in partnership with D’Genes (Asociación de enfermedades raras) – an association that helps with the treatment of rare diseases that afflict children in Hispanic countries. The symposium educated doctors and the healthcare/medical community in how to identify symptoms and treat children with rare diseases.

IN EUROPE, Jeunesse Kids made an impact in Portugal, Italy and Germany with three different projects.

In Portugal, we sponsored a run called Colaboração 4ª Corrida in partnership with Amorama em Marcha – a non-profit organization which supports young kids and teenagers with intellectual disabilities that cannot live alone. They host a home that has 22 kids, while also providing in-home support to those living with their parents.

We also raised money at our Rome University, helping the Meyer Children’s Hospital with 24,306 euros (goal was 10,000) to purchase resuscitation equipment for the pediatric intensive care unit.

Finally, we ended the year in incredible fashion at the Berlin Regional Convention, working with KINDerLEBEN and the Charité Hospital in Berlin. KINDerLEBEN helps fund programs for children going through cancer treatment – with 100 percent of funds going to the projects they support. We partnered with them on a project to renovate the pediatric oncology ward at Charité Hospital.

IN 2017, we will be launching new initiatives around the world – including projects in Russia and Australia/New Zealand.

We will also head to Ecuador, where we have adopted our third WE village, Los Rios. Our leaders will take the initial Bringing Hope trip to the Amazon basin – to meet community members and lend a helping hand.

This comes on the heels of a week-long trip to our adopted WE village in Irkaat, Kenya in 2016, where we cut the ribbon on a new school and water source that were built with the funds donated by Jeunesse Kids as well as meet community members, plant trees, build a school in a neighboring village as well as literally walk a mile in the shoes of the women by carrying water on our backs. In 2017, we’ll return to Irkaat – and this trip is open to all Distributors. If you’re interested in joining us, e-mail [email protected]. Here’s a glimpse at what you can expect:

We’d like to end 2016 by thanking each of you for empowering communities to give children a brighter future. Your support continues to be humbling, and we know that you will make sure that 2017 will exceed our cumulative expectations yet again.